Hollywood’s iconic Ultimate Jam Night has been a staple, attracting some of rock’s biggest stars.  Brought to life by Chuck Wright of Quiet Riot, Ultimate Jam Night has gained such notoriety that it has upgraded from its Lucky Strike residency to the Whisky A Go Go.  Wright’s house band  drummer Matt Starr (of Mr. Big), guitarist Mitch Perry (of the Edgar Winter Group and MSG), and MC Paulie Z. (of Z-Rock and Z02) are just some of rocks major players that take the stage.  Legends such as Nuno Bettencourt, Gilby Clark, Michael Starr and more have all passed thorough. 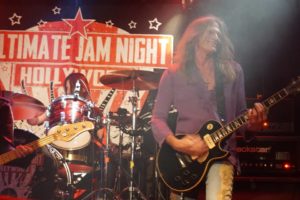 t performances throughout the night.  Ultimate Jam Night has featured over 700 of the worlds top musicians, boasting one of the biggest names in the business and it will continue to grow.

This was the debut for Jam Night at the Whisky and it’s off to a great start and promises a few surprises and curvballs, thanks to its new location.  Chuck Wright set up Ultimate Jam Night for a single purpose, to build the rock community back up in Hollywood and it looks like it’s working.  We’re glad to say that Hollywood Leggings is a part of that.